Whether you’re in the mood for a never-ending chocolate Easter egg, or are super keen and organised and you are already planning next year’s event – re-using your plastic egg packaging is a great way to make unique home-made eggs which are not only cheap, but also beautiful. 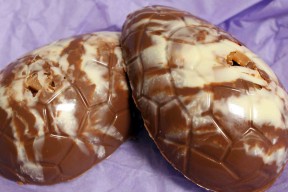 Prepare all the fillings

Melt white chocolate in a bowl over simmering water, and drizzle into the mould. At this stage you will achieve a marble effect, leave until the end if you want to make it more prominent.

Melt the milk or dark chocolate. Have a look at this BBC good food article about tempering your chocolate for a really good result: http://www.bbcgoodfood.com/blog/654-how-to-temper-chocolate/

Put in the fridge and allow to fully set.

Take out from fridge and gently remove from the mould. If the halves are separate, use some fresh melted chocolate and a spatula to join the two halves.

Add any additional decorations, then present!

Keep up to date